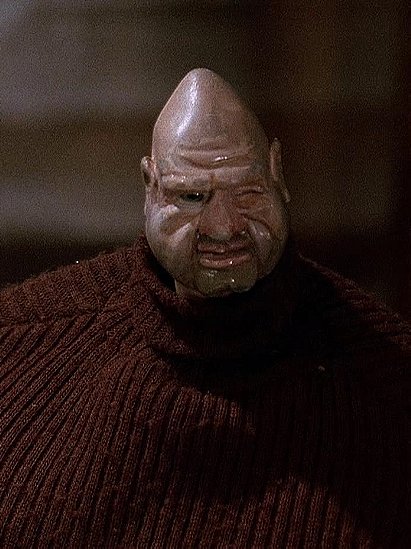 View all Pinhead (Puppet Master) pictures
Pinhead is one of the puppets built by Andre Toulon during the second World War in Berlin. Before he became a puppet, Pinhead was a man named Herman Strauss. Strauss was a truck driver who secretly brought food to the Jewish ghettos; as a result, he was executed in the gas chambers by the Nazis for treason. Pinhead along with Blade are the only characters to appear in all the Puppet Master movies to date.

Pinhead's only power is his two big hands that can deliver quite a punch. He's also unnaturally strong, able to move or drag a full grown human body with ease. Pinhead's weakness is if someone removes his tiny bald head from his burly body, (which only happened in the first Puppet Master).

Pinhead's place in the group is that of the strong man, the muscle. Pinhead has suffered the most injuries out of all the puppets throughout his career. His head was pulled off. He's been stabbed, shot, stomped on, set on fire, and had his arm broken off twice.