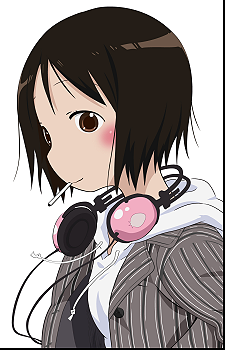 Nobue is the eldest main character. She is Chika's older sister and usually has final authority on all matters. She often tries to "borrow" money from Chika to buy cigarettes. Nobue is perpetually searching for a part-time job to earn money for more cigarettes to calm her nicotine addiction.

The story suggests that Nobue derives some kind of sensual pleasure from watching the girls do cute things. In this respect, Nobue appears to appreciate the moe aesthetic. It is seen during the anime that Nobue prefers Matsuri and Ana over Chika and Miu.

The Nobue character changed from the manga to the anime. In the manga, she is a sixteen-year-old high school freshman, while in the anime she is a twenty-year-old junior-college student. Her age is presumably changed because of her smoking and drinking habit, both becoming legal in Japan at age twenty. Although in the first episode of the anime she introduces herself as a sixteen-year-old, this was intended to be a joke as she quickly stated that she was twenty.

She tends to act somewhat less mature in her manga incarnation, doing things such as tricking Matsuri into thinking that Miu is dead. Her appearance changes radically in the early stages of the manga, especially her hair, which goes from blond to dark brown (and is black in the anime).
Read more at [Link removed - login to see]