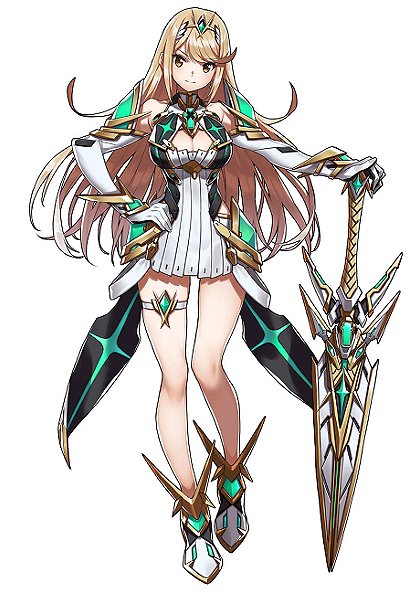 View all Mythra pictures
Mythra is a main character in Xenoblade Chronicles 2. She is the Aegis, a Legendary Blade who can grant tremendous power to her Driver Rex, and his allies. Since Pyra is another personality Mythra created, they can freely switch places. Rex is able to freely use this ability both in and out of battle upon starting Chapter 5.

Mythra's powers have a focus on light-element attacks. Some of her other powers include near light-speed movement and Foresight, which allows her to seek into the immediate future. However, after Pyra shares her life force with Rex, Mythra becomes subject to the same limitations in regards to her healing capabilities and immortality.

Mythra is also a central character in Torna ~ The Golden Country. She is a Special Legendary Blade who can grant tremendous power to her Driver Addam and his allies.