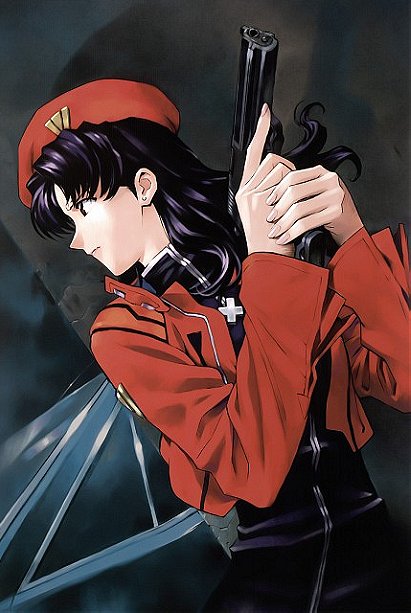 1 vote
View all Misato Katsuragi pictures (17 more)
Misato Katsuragi is a fictional character from the Neon Genesis Evangelion franchise created by Hideaki Anno. She is the operations director at Nerv, initially with the rank of captain; she is later promoted to major. In Rebuild of Evangelion Misato's rank is lieutenant colonel. Her duties at Nerv include acting as a field commander for the Eva pilots, issuing orders and relaying battle strategies as well as processing input from Ritsuko Akagi and the technicians monitoring the Evas. She also handles many bureaucratic aspects of Nerv's operations.

At the beginning of the series, Misato first brings Shinji Ikari to Nerv and is able to convince him to pilot the Eva Unit 01. She then chooses to have Shinji move in with her rather than live alone, and later takes in Asuka Langley Soryu. As the series progresses, through her former lover Ryoji Kaji she learns the truth behind the Human Instrumentality Project and the depths of deception that Nerv and Seele have gone to keep the Project secret, even from her.

farahbear rated this 9/10 6 months ago

mjkalasky voted for an image 8 months, 3 weeks ago

midnightgear rated this 9/10 1 year ago

WillChangeTomorrow rated this 9/10 1 year, 5 months ago