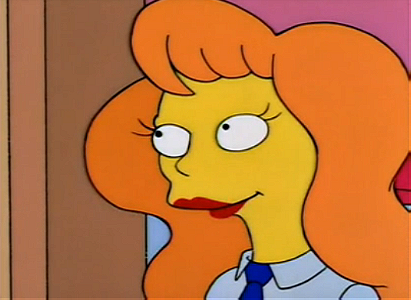 1 vote
View all Mindy Simmons pictures (4 more)
Mindy Simmons was an employee of the Springfield Nuclear Power Plant. She likes the same things as Homer Simpson, like donuts. When Homer met her at work, he found himself highly attracted to her.
Mindy is the female equivalent of Homer:[6] She likes cheeseburgers, a quick nap before lunch, foot-long chili dogs, whipped cream straight from the can, raspberry swirl doughnuts with a double glaze, drinking Duff beer, watching TV, and roasted anything. When Homer and Mindy were in a cramped lift together, Homer tried to think about unsexy thoughts to keep his mind off her, and when he opened his eyes, she was doing the same thing about him. Mindy also has a tendency to drool like Homer when thinking about food and even uses his "Mmm..." catchphrase. The only difference between the two of them is that despite her overindulgent ways, Mindy has a slim and attractive figure, contrasted with Homer's overweight appearance.

Schizoidsudaca rated this 6/10 1 month, 2 weeks ago