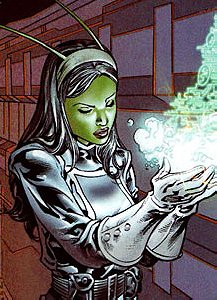 1 vote
View all Mantis (Marvel) pictures (2 more)
Mantis first appeared in Avengers (volume 1) #112 (June 1973), drawn by Don Heck. Created by writer Steve Englehart, the character may be unique in the fact that she later appeared (in slightly different name and form) in books published by other comic book companies, moving from Marvel to DC to Eclipse to Image and finally back to Marvel again.

Mantis is the half-Vietnamese, half-German daughter of Gustav Brandt%u2014Libra%u2014and was born in Hu%u1EBF, Vietnam. In her childhood, her father leaves her in Vietnam at the Temple of the alien Priests of Pama, a sect of the Kree. The Kree believe she might become the Celestial Madonna and mate with the eldest Cotati on Earth to become the mother of the Celestial Messiah, "the most important being in the universe."

She has been a member of The Avengers, West Coast Avengers and the Guardians of the Galaxy.

upgradeslinky rated this 4/10 3 years, 4 months ago