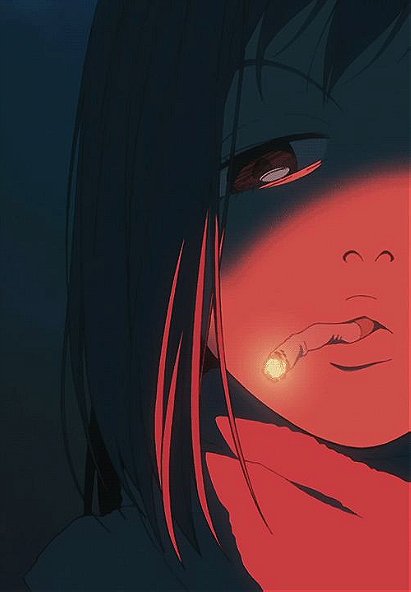 View all Mamimi Samejima pictures (10 more)
Mamimi Samejima, 17, was Tasuku's girlfriend, though she hits on Naota since his brother left Japan. She is a truant high school student with pyromaniacal tendencies; she also smokes a lot and spends most of her time under a bridge. She is often seen with a camera, and was once seen smoking worn cigarette with "Never Knows Best" written onto the paper.

She has the peculiar tendency to name people and things "Ta-kun (Or sometimes simply spelled as Takkun)," after her personal nickname for Naota's brother (and Naota himself). The "-kun" suffix is an informal and intimate honorific primarily used when addressing males of equal or junior status. Mamimi is likely using Naota as a substitute for Tasuku and therefore refers to him as "Ta-kun" which can be short for both Naota and Tasuku. (Naota is well-aware of the similarity between his nickname and his brother's name.) Mamimi also calls Tasuku "Tasuku-sempai" since he is an older classmate.

The story originally sets forth that her fascination with fire stems from Tasuku having rescued her from the elementary school fire, although it is later hinted that she was the one who started that fire. Mamimi holds an almost quixotically weak grip on the difference between fantasy and reality; for example, she believes Canti to be the manifestation of Cantido, the video game god to whom she burns things as sacrifices. She also emanates an aura of benign vapidness that causes much of the cast (Naota's classmates especially) to look upon her with disdain. In fact, Mamimi can be exceedingly destructive - although only when nobody is watching. She spends much of FLCLimax exacting retribution against those who have wronged her - only to have her plan backfire.

Mamimi can be seen to lack control over her life or willpower, hence the near-constant smoking and child-like reliance on others, whether it'd be Naota or his older brother Tasuku. This could also explain why she loves taking care of things that are weak-willed, which she leaves (or which escape, like Ta-kun, the black kitten) when they start to show independence. This leads to her eventual disinterest in Naota and ultimately proves a disaster for her when her last adoptee, the terminal core from a robot, goes haywire and overpowers first her and then the military.

As far as high schoolers go, she seems to be rather sexually frustrated, as she often pursues an uncomfortable level of intimacy with Naota (most likely because she sees him as his brother's replacement), which annoys Naota greatly. When he asks why she constantly clings to him, she responds "If I don't, I'll overflow."

Most characters refer to Mamimi simply as Mamimi, but Naota's friends refer to her as "Naota's Wife" and Haruko calls her "Sameji", a shortening of her last name. Amarao refers to her as "that high school girl".
Read more at [Link removed - login to see]

orandodaniel rated this 8/10 3 months, 3 weeks ago

MerryKurisuma rated this 8/10 4 months, 1 week ago

deathskfull rated this 8/10 5 months ago

emastic98 added this to Rated list 1 year, 8 months ago

drekigwib added this to a list 1 year, 9 months ago
Personajes Favoritos (13 characters items)

WillChangeTomorrow rated this 8/10 2 years ago

SomethingCoolIDK added this to a list 3 years, 9 months ago

"The perfect "Broken, Fucked-Up in the head" kind of girl. And I'm into it. SHE BURNED DOWN A HOUSE. SHE'S PUNK AS FUCK ~Ta-kun~"