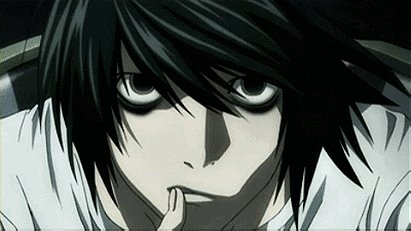 YuukiZero603
L! L! L! L! L! L! L! L! L! L! L!
He's my favourite cartoon character ever! Not happy about what happens to him though! :(
View all L reviews
L is a fictional character in the manga and anime series Death Note. He is a genius detective who opposes the machinations of Light Yagami, otherwise known as the mass-murderer "Kira". L is voiced by Kappei Yamaguchi and Alessandro Juliani, respectively, in the Japanese and English versions of the anime. The character has been praised by several manga and anime reviewers.

L often uses dramatic strategies to confuse his opponents and force their hand. He eats sweet things exclusively, and is usually seen eating fruit or cake, or drinking sweetened coffee or tea. L's behavior is also peculiar: he sits in an unusual position, and always wears the same outfit. He holds things extremely delicately, by corners, and has a habit of biting his thumb. He has at least three aliases, including those of the world's so-called second and third greatest detectives, Eraldo Coil and Deneuve. In the first light novel, Another Note, it's said that L won these aliases in a "detective war" with the real Coil and Deneuve.

midnightgear rated this 8/10 3 months, 3 weeks ago

WillChangeTomorrow rated this 9/10 9 months, 1 week ago

mayopaprika rated this 8/10 11 months ago

Jeremantonio rated this 7/10 1 year ago

Leonxz added this to a list 3 years, 4 months ago
Favorite Characters (38 characters items)

SomethingCoolIDK rated this 9/10 3 years, 8 months ago

upgradeslinky rated this 8/10 3 years, 8 months ago