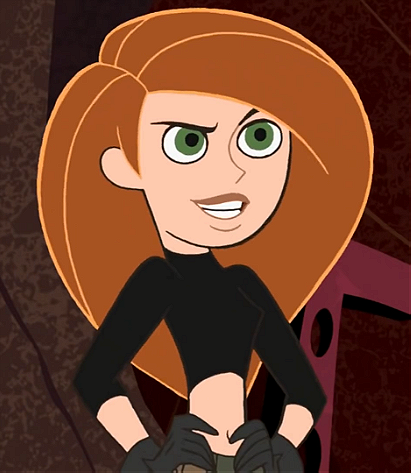 22 votes
The Most Bad Ass Characters of All Time (94 items)
list by moviebuff
Published 6 years, 5 months ago

View all Kim Possible pictures (31 more)
Kimberly Ann "Kim" Possible is the main protagonist of the series and the title character from the animated television series Kim Possible.
Kim debuted in the series opening episode in June 2002, and starred in all 65 episodes of Season 1-3. She made her Season 4 debut in an episode broadcast exclusively over the Disney Channel website, returned to Disney Channel on the 10th of February.

Kim like Yori is a tomboyish yet very beautiful high school student and freelance hero/secret agent. She is unusual in this field in that she has no secret identity; for the most part, her classmates are aware of her work but do not comment on it unless it affects them directly. At school, she is cast as one of the "popular kids," head of her cheerleading squad at school, and a straight-A student, rather than as a misunderstood outsider/underdog.

It has been announced that Kim Possible might make a Cameo in the upcoming film Total Reality.

sage40k posted a image 12 months ago

OneSpiderClone rated this 7/10 3 years, 5 months ago

compcua added this to a list 5 years, 3 months ago
The Disney Factor (155 person items)

moviebuff added this to a list 6 years, 5 months ago
The Most Bad Ass Characters of All Time (94 characters items)