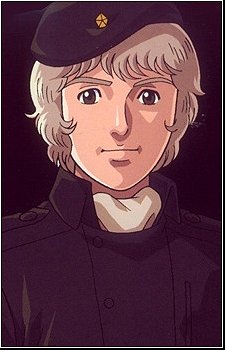 View all Julian Minci pictures
Birthdate: March 26, 782 U.C. Julian Minci is the son of a soldier who served in the Alliance’s army, he lost his mother at a very young age and, some years later, his father was killed in battle leaving him a war-orphan. As such Julian was admitted in the wartime welfare program and, through the mediation of vice admiral Alex Cazellnu, he was made Yang Wenli’s ward. Julian is a very intelligent and responsible boy with a knack for house chores and is the one who takes care of the domestically incompetent Yang, so much so that their friends often wonder who amongst the two is the real guardian and who the ward. Julian loves Yang and deeply respects him, both for his kindness and his well-defined philosophy on life. Yang wants a peaceful life for Julian, but, much to his disappointment, Julian’s dream is to follow in his and his father’s footsteps and become a soldier.

Your Rating:
Tags: Legend Of The Galactic Heroes (1)
My tags:

MerryKurisuma rated this 8/10 1 month, 4 weeks ago

petrovsky rated this 8/10 2 months ago

WillChangeTomorrow rated this 9/10 1 year, 9 months ago