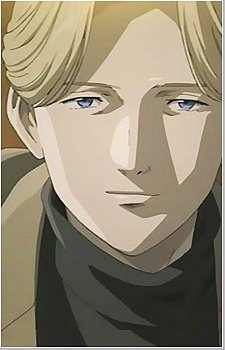 1 vote
View all Johan Liebert pictures
Johan Liebert is the main antagonist and the titular "monster" of the series. He is a fairly realistic take on an Anti-Christ figure and the exploration of Doomsday themes in anime/manga. Johan is quite a mysterious fellow who causes many tragedies in his wake, and he could be described as a serial killer of sorts. At the height of his terror in Ruhenheim, Johan is described by Herbert Knaup as the beast with seven heads and ten horns.

crazymetalhead added this to a list 1 year, 1 month ago
666GreatestFictionalVillains in abc order (2022) (354 characters items)

WillChangeTomorrow rated this 9/10 2 years, 6 months ago

crazymetalhead added this to a list 2 years, 9 months ago
666GreatestFictionalVillains in abc order (2021) (606 characters items)

thesanmartin voted for an image 5 years, 2 months ago

toncue12 added this to a list 5 years, 3 months ago
TOP 55 Most Interesting Anime Characters (56 characters items)