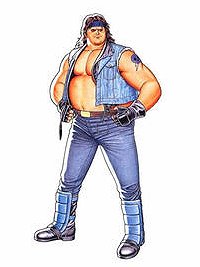 View all Jack Turner pictures
Jack Turner is a member of Mr. Big's syndicate, and a developer of his own fighting style. One of Mr. Big's highest-ranking subordinates, he devastates anyone who crosses his path. After a fight with Ryo and Robert at Mac's Bar, Jack claims that he saw Yuri was taken to Chinatown. Jack is also the leader of the Southtown gang known as the Neo Black Cats. Humorously, in Jack's ending in AOF2, it was revealed that he wanted to make the gang into a dance group.