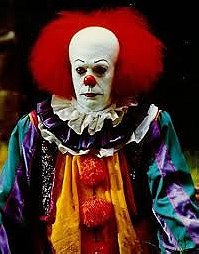 View all It pictures
It is a creature what appeared in th Stephen King novel 'IT'.

"It" apparently originated in a void containing and surrounding the, a place referred to in the novel as the "Macroverse" (a concept similar to the later established Todash Darkness of The Dark Tower series). It's real name is Bob Gray or Pennywise (although at several points in the novel, It claims its true name to be Robert Gray) and is christened "It" by the group of children who later confront It. Likewise, It's true form is never truly comprehended. It's favorite form is a clown (with fangs and large claws when it stalks a child) known as Pennywise the Dancing Clown, and It's final form in the physical realm is that of an enormous spider, but even this is only the closest the human mind can get to approximating It's actual physical form. It's natural form exists in a realm beyond the physical, which It calls the "deadlights". Bill comes dangerously close to seeing the deadlights but successfully defeats "It" before this happens. As such, the deadlights are never seen and It's true form outside the physical realm is never revealed, only described as writhing, destructive orange lights. Coming face to face with the deadlights drives any living being instantly (a common device). The only known person to face the deadlights and survive is Audra Phillips, Bill's wife.

It's natural enemy is, another ancient Macroverse dweller who, eons ago, created our universe and possibly others. The Turtle shows up again in King's series The Dark Tower. The book suggests that It, along with the Turtle, are themselves creations of a separate, omnipotent referred to as . The Turtle and It are eternal enemies, however It tells Bill that the Turtle died a few years ago when he "puked in his shell and choked to death on a or two". It arrived in our world in a massive, cataclysmic event similar to an impact, in the place that would, in time, become Derry, Maine.

It's power is apparently quite vast; during the second Ritual of Chüd, It offers the Losers money, power, and lifespans if they spare It. Of course, It could merely have been bluffing in order to save itself.

Through the novel, some events are described through It's point of view, through which It describes itself as the "superior" being, with the Turtle as someone "close to his superiority" and humans as mere "toys." It describes that it prefers to kill and devour children, not by nature, rather because the fears of children are easier to interpret in a physical form and thus children are easier to fill with terror, which It says is akin to "salt(ing) the meat". It is continuously surprised by the children's victories and near the end, It begins to wonder if it perhaps isn't as superior as it had once thought. However, It never believes that the individual children are strong enough to defeat It, only through "the Other" working through them as a group.

SwornShadow rated this 7/10 2 years ago

rollcallaction rated this 7/10 3 years, 6 months ago