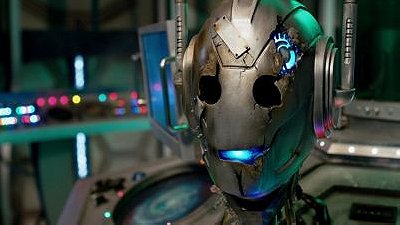 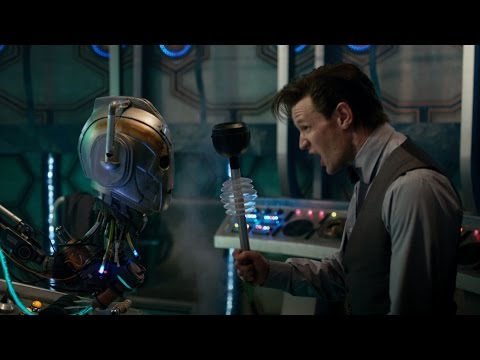 The Message - Doctor Who - The Time of the Doctor - BBC

View all Handles pictures (3 more)
"Handles" was the name given by the Eleventh Doctor to a Cyberman head that he had obtained from the Maldovarium Market, and subsequently repaired. All of its organic components and Cyberman protocols had been cleaned out, leaving it a plain, docile robot that interpreted commands literally, whether or not they were meant to be taken as rhetorical statements. Handles went on many adventures with him as he searched for the mysterious planet of Trenzalore. When the Doctor went aboard ships orbiting Trenzalore before he gained access, Handles was accidentally brought aboard a Cyber-Ship, which led the Cybermen to attack the Doctor.
Outliving the residents he had chosen to protect, Handles was the Doctor's only constant companion during his first three hundred years in Christmas. As the years passed, Handles began to corrode with rust and slowly lost his functionality. The Doctor kept repairing Handles as best he could, but he lacked enough spare parts and it eventually broke down. Before shutting down, Handles finally fulfilled an order the Doctor had given it prior to landing on Trenzalore: reminding the Doctor to patch the TARDIS phone back to the console. Handles' death reduced the Doctor to tears. In his delirious post-regenerative condition, the Twelfth Doctor briefly mistook Clara Oswald for Handles, despite the obvious physical differences between the two.

The Message - Doctor Who - The Time of the Doctor - BBC