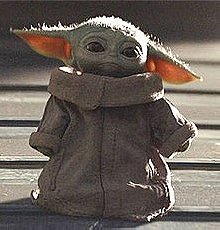 View all Grogu pictures
Grogu (also known as "Baby Yoda" among fans and the media) is a character from the Star Wars Disney+ original television series The Mandalorian. He is a toddler member of the same unnamed alien species as the Star Wars characters Yoda and Yaddle, with whom he shares a strong ability in the Force. In the series, the protagonist known as "the Mandalorian" is hired to track down and capture Grogu for a remnant of the fallen Galactic Empire, but instead, he becomes his adoptive father and protects him from the Imperials. The character's real name was not revealed until "Chapter 13: The Jedi" (released on November 27, 2020), which also explained that Grogu was raised at the Jedi Temple on Coruscant during the Clone Wars. Prior to this, the character's official name, as used in subtitles and captions, was "The Child".

Your Rating:
Tags: The Mandalorian (1)
My tags: