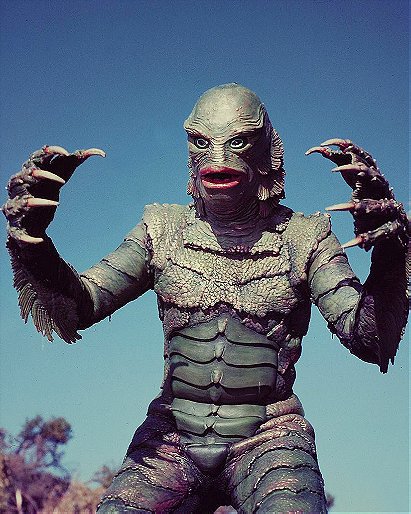 View all Gill-man pictures (2 more)
The Creature, sometimes referred to as the Gill-man, is the titular character of the 1954 black-and-white science fiction film Creature from the Black Lagoon and its two sequels Revenge of the Creature (1955) and The Creature Walks Among Us (1956).

Ricou Browning portrays the underwater Gill-man throughout the three films and is the only Creature actor to play the Creature more than once and is the only one that is still alive today. Ben Chapman plays the Gill-Man on land in the first film, followed by Tom Hennesy in the second, and Don Megowan in the third.

The Gill-man's popularity as an iconic monster of cinema has led to numerous cameo appearances, including in an episode of The Munsters, the motion picture The Monster Squad and a stage show.

crazymetalhead added this to a list 2 years, 4 months ago
666GreatestFictionalVillains in abc order (2021) (605 characters items)

Diabolik added this to a list 4 years, 7 months ago
Favorite Characters (128 characters items)

upgradeslinky rated this 6/10 5 years, 5 months ago