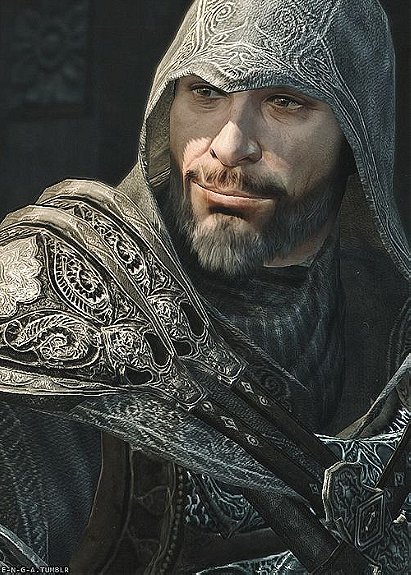 1 vote
View all Ezio Auditore da Firenze pictures (63 more)
Ezio Auditore da Firenze (1459 – 1524) was a Florentine nobleman during the Renaissance, and, unbeknownst to most historians and philosophers, the Mentor of the Italian Brotherhood of Assassins, a title which he held from 1503 to 1512. He is also an ancestor to Desmond Miles and Clay Kaczmarek.
A member of the House of Auditore, Ezio remained unaware of his Assassin heritage until the age of 17, when he witnessed the hanging of his father and two brothers, Federico and Petruccio. Forced to flee his birthplace with his remaining family members - his mother and sister - Ezio took refuge in the Tuscan town of Monteriggioni, at the Villa Auditore.

After learning of his heritage from his uncle, Mario Auditore, Ezio began his Assassin training and set about on his quest for vengeance against the Templar Order, and their Grand Master, Rodrigo Borgia, who had ordered the execution of his kin.

During his travels, Ezio managed to not only unite the pages of the Codex, written by Altaïr Ibn-La'Ahad, Mentor of the Levantine Assassins, but also to save the cities of Florence, Venice, and Rome from Templar rule.

He ensured the future travels of Christoffa Corombo to the "New World", liberated Rome from Borgia rule, and prevented the rise to power of Ercole Massimo's Cult of Hermes, helping spread the Renaissance and Assassin ideals of independence and free will throughout Italy.

In the years that followed, Ezio began a quest to rediscover the lost history of the Order. Traveling to the aged fortress of Masyaf in order to learn more of the Assassins before him, he discovered it overrun with Templars and made his way to the city of Constantinople to uncover the location of the Masyaf keys which, as he discovered, would unlock the fortress's fabled hidden library when brought together.

A decade later, Ezio was retired and resided in a Tuscan villa with his wife, Sofia Sartor, and his two children; Flavia and Marcello. Some time after helping teach the Chinese Assassin Shao Jun the ways of the Order, Ezio died of a heart attack at the age of 65, during a visit to Florence with his wife and daughter.

Rylvan added this to a list 2 years, 11 months ago

Rylvan voted for an image 4 years, 2 months ago