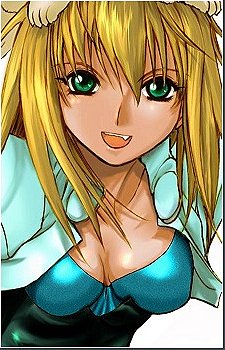 View all Excel pictures
The heroine of the story. She joines ACROSS immediately after graduating from high school. Excel's principal virtues are her energy and loyalty to ACROSS' mission, and her single-minded infatuation with Lord Il Palazzo. Despite this, Excel is incompetent in her position and rarely succeeds in her missions, even by accident. Excel is hyperactive and energetic, and is known to talk so fast and inconsistent that people around her find her difficult to understand, an example being that even though Il Palazzo admires her energy, he states that he has no idea what she's talking about most of the time. One notable characteristic of Excel is that she often talks in third person, even when speaking about herself.

Excel also dies quite often, especially in the first episode, and she is being resurrected several times by The Great Will of the Macrocosm.

Menchi is her emergency food supply, even though she luckily never actually eats her.

While Excel's given name and family name are both "Excel" in the anime adaptation, "Excel" is merely her codename in the original manga. She also uses a false name, Hanako Dosukoi, a few times. Her actual name has not yet been revealed.
Read more at [Link removed - login to see]