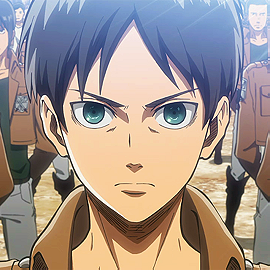 1 vote
View all Eren Yeager pictures (7 more)
Eren is Attack on Titan's protagonist. His adoptive sister, Mikasa, notes on numerous occasions that he acts on impulse without thinking things through, and she often pulls/carries/throws him when he starts fighting with others to protect him from himself. Along with Mikasa, he tends to spend his free time with their mutual friend, Armin.

Even as a child, he was always eager to want to join the Survey Corps, for the sake of escaping the Walls and exploring the outside world. This strong yearning for freedom and his dedication to his comrades were Eren's greatest strength and assets.
Because of his strong dedication, however, this can often lead to his obstinate arrogance which ultimately can lead to him making reckless mistakes and decisions that put him, his friends and later the nation which he is supposed to protect, in great danger. During his life as a trainee sent hastily to fight Titans his recklessness claimed lives of his teammates, saving Armin Arlert. He also tends to have a short temper and can often lash out in anger out of nowhere.

When Eren learns the truth about the world and the Titans, he changes quite drastically. His hatred for the Titans has disappeared and has now taken on a calm and more serious approach. He has fully acknowledged Marley as the true enemy and will go out of his way to stop them, even if it means going out of his way to commit horrid acts such as killing innocent bystanders and causing collateral damage.

ubermensh voted for 2 images 6 months ago

OneSpiderClone rated this 7/10 2 years, 2 months ago