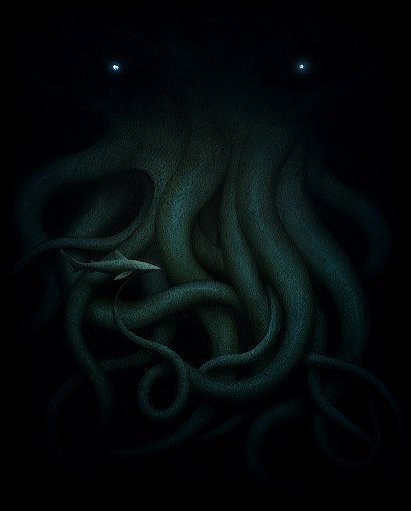 View all Cthulhu pictures (2 more)
Cthulhu is a fictional cosmic entity who first appeared in the short story "The Call of Cthulhu", published in the pulp magazine Weird Tales in 1928. The character was created by writer H. P. Lovecraft. Considered a Great Old One within the pantheon of Lovecraftian cosmic entities, the creature has since been featured in numerous popular culture references.

In "The Call of Cthulhu", H. P. Lovecraft describes the Cthulhu as "A monster of vaguely anthropoid outline, but with an octopus-like head whose face was a mass of feelers, a scaly, rubbery-looking body, prodigious claws on hind and fore feet, and long, narrow wings behind." Cthulhu has been described as a mix between a giant human, an octopus, and a dragon, and is depicted as being hundreds of meters tall, with human-looking arms and legs and a pair of rudimentary wings on its back. Cthulhu's head is depicted as similar to the entirety of a giant octopus, with an unknown number of tentacles surrounding its supposed mouth. Cthulhu is described as being able to change the shape of its body at will, extending and retracting limbs and tentacles as it sees fit.

Diabolik added this to a list 2 years, 4 months ago
Favorite Characters (128 characters items)

upgradeslinky rated this 9/10 3 years, 2 months ago