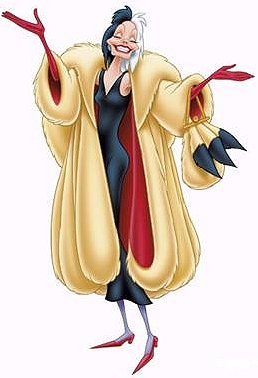 View all Cruella De Vil pictures
Cruella De Vil is the iconic main antagonist of the 101 Dalmatians franchise. She is a wealthy, fashion-obsessed heiress who wishes to use the skins of 99 Dalmatians puppies for a fur coat. She first appeared in the novel the 101 Dalmatians (1956) by Dodie Smith. Perhaps the most famous incarnation of the character was developed for Disney's 1961 animated adaptation 101 Dalmatians by story man Bill Peet, animator Marc Davis, and voice artist Betty Lou Gerson. Disney's villainess proved successful, and has led to appearances in other media. She has also been voiced by April Winchell in the television series and by Susanne Blakeslee in the animated sequel as well as Fantasmic! and House of Mouse.

Cruella is among the most critically-acclaimed and popular Disney characters of all time, and is held in a similar regard among cinematic villains, once being voted the 39th greatest movie villain of all time, the 82nd most popular film character of all time and the 31st greatest movie female of all time. She is also one of Disney’s single most iconic and memorable characters; referred to in television shows such as the Simpsons, her name served as the inspiration for a fetish magazine, as well as a short-lived Northern Irish post-punk band. She remains a recognizable image in popular culture and is an official member of the Disney Villains.

upgradeslinky rated this 2/10 3 years, 3 months ago

compcua added this to a list 3 years, 10 months ago
The Disney Factor (152 person items)

tkd27 added this to a list 4 years, 5 months ago
My Google Best Disney Character (40 characters items)