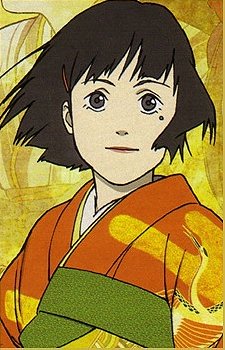 View all Chiyoko Fujiwara pictures
Chiyoko grew up in the middle of World War II Japan, running a sweets shop with her controlling mother, when she is approached by the director of a film studio and is asked to perform in the studio's upcoming movie. Chiyoko's mother, without a word from Chiyoko, steps in and bluntly turns them away, calling acting a "dubious profession."

Later the same day, Chiyoko is accidentally knocked down by a mysterious man running from police officers. Despite his hurried state, he takes the time to help Chiyoko to her feet and apologize for running into her. This act of kindness sticks out to Chiyoko, and so she sends the officers away from the man as he hides. She allows the man to stay in her store room in secret, where he tells her stories of his home, and how he hopes to finish his painting of the snowy landscape, once the war is over. Chiyoko is soon introduced to a skeleton key around the man's neck, which he addresses as the key to "the most important thing there is." Chiyoko asks that the man wait until the next day to tell her what the most important thing is.

Unfortunately, this chance never comes. Chiyoko returns to school to find the police discovered the man hiding in her store room, and finds his key outside, covered in blood from the man's injuries. The store clerk hints to Chiyoko that he fled to the train station, and Chiyoko hurries to follow him. She ultimately does not make it in time to stop him, and makes a promise that she will return the man's key to him no matter what. This drives her to sway from her mother's wishes, and Chiyoko begins making movies.

Yuyo added this to a list 11 months, 2 weeks ago
Personajes favoritos (15 characters items)

Yuyo added this to a list 11 months, 2 weeks ago
Favorite Characters (15 characters items)