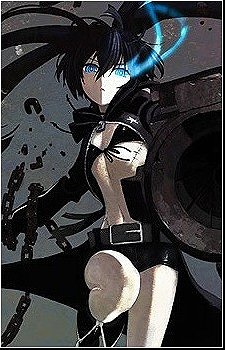 View all Black ★ Rock Shooter pictures
Black★Rock Shooter is an original character developed by artist Huke who rose to fame after appearing in an Hatsune Miku music video developed by the popular composing group Supercell. She is often compared to Hatsune Miku, sharing some similarities in her design. Her distinguishing features include a luminescent blue flame that appears on her left eye, a large 'Rock Cannon' she wields (as well as a black blade).

Personality-wise, very little is known about her.Black★Rock Shooter is a pale-skinned, blue-eyed girl, with black hair in uneven twintails (possibly, because one tail was burned); the right lock of her hair is shorter than her left. She bears two scars on her midriff; she wields an arm cannon and a katana. A blue flame shoots out from her left eye.

Her clothes consist of a string bikini top under a black jacket. The jacket has a white stripe running along the length of each of her sleeves and has a white star design on the front (left side) and back. She also wears a pair of tight-fitting shorts and black knee-high boots.

Black★Rock Shooter also has a 'human form' who is shown in the pilot animation to be a black-haired school girl with blue eyes. She has short, choppy pig tails that resemble Black★Rock Shooter's hair.

SomethingCoolIDK rated this 9/10 4 years, 10 months ago