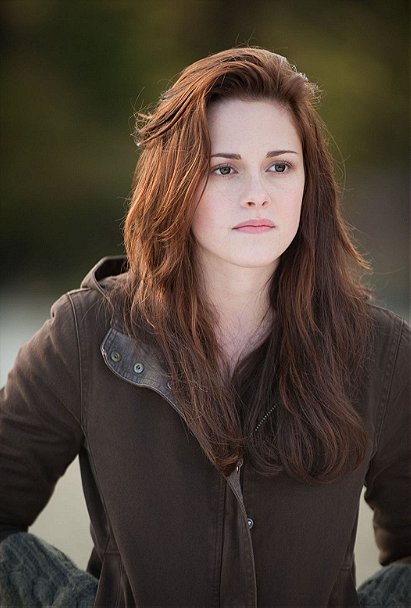 1 vote
View all Bella Swan pictures (10 more)
Isabella Marie "Bella" Swan (later Bella Cullen) is a character and the protagonist of the Twilight series, written by Stephenie Meyer. The Twilight series, consisting of the novels Twilight, New Moon, Eclipse, and Breaking Dawn, is primarily narrated from Bella's point of view. In the film series, Bella is portrayed by actress Kristen Stewart.
In Twilight, Bella moves to her father's home in Forks, Washington, meets the mysterious Cullen family, and falls in love with Edward Cullen. However, she soon discovers that the family is a coven of vampires. Bella expresses a desire to become a vampire herself, against Edward's wishes. In the second novel, New Moon, Edward and the other Cullens leave Forks in an effort to keep Bella safe from the vampire world. Jacob Black, a member of the Quileute tribe who is also a shape shifter taking a wolf form, comforts the distraught and severely depressed Bella. She comes to care deeply for Jacob, though less than she loves Edward. At the end of Eclipse, Bella becomes engaged to Edward, and they marry in Breaking Dawn. On their honeymoon, she becomes pregnant by Edward and, due to complications in child birth, Bella nearly dies giving birth to their daughter, Renesmee Cullen. Edward turns her into a vampire to save her life.

bombshellbarba added this to a list 2 months, 1 week ago
Enhanced Durability (164 characters items)

bombshellbarba added this to a list 2 months, 1 week ago
Super Speed (88 characters items)

bombshellbarba added this to a list 2 months, 1 week ago
Super Strength (291 characters items)

bombshellbarba added this to a list 2 months, 1 week ago
Immortality (91 characters items)

nofinalaccount rated this 1/10 3 years, 3 months ago

bandofsisters rated this 1/10 4 years, 8 months ago

Director Black rated this 1/10 6 years ago