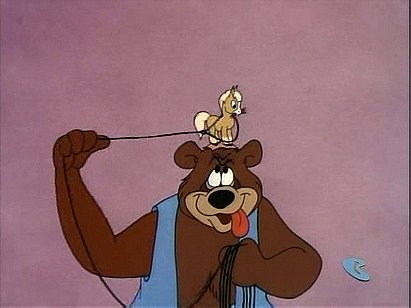 1 vote
View all Barney Bear pictures (15 more)
Barney Bear is an animated sluggish, sleepy bear who often is in pursuit of nothing but peace and quiet. He starred in a series of animated cartoon short subjects produced by Metro-Goldwyn-Mayer cartoon studio.

He was created by director Rudolf Ising, who based the bear's grumpy yet pleasant disposition on his own and derived many of his mannerisms from the screen actor Wallace Beery.

Barney Bear made his first appearance in 'The Bear That Couldn't Sleep' in 1939, and by 1941 was the star of his own series, getting an Oscar nomination for the 1941 short 'The Rookie Bear'.

rickterenzi voted for 7 images [View All] 6 years, 2 months ago