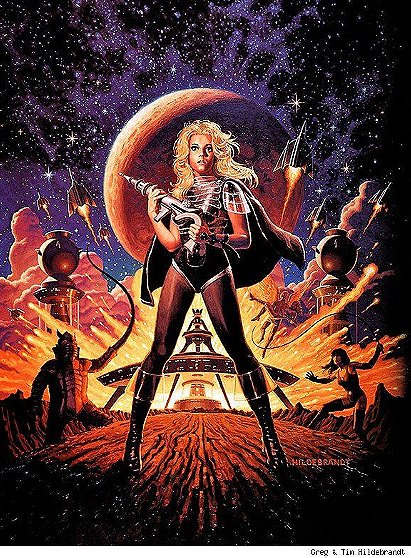 2 votes
View all Barbarella pictures (3 more)
A young woman who travels from planet to planet and has numerous adventures, often involving sex (the aliens she meets often seduce her, and she also experiments with a "machine excessive" or "orgasmotron"). The original comic book version of Barbarella was probably modeled on Brigitte Bardot, who was once married to the director of the 1968 film, Roger Vadim. Vadim's third wife, Jane Fonda, starred as Barbarella in the 1968 movie based on the character.

OneSpiderClone rated this 7/10 2 years, 6 months ago

Diabolik added this to a list 3 years, 3 months ago
Favorite Characters (128 characters items)

Lena voted for an image 4 years, 1 month ago

Brian G added this to a list 5 years, 3 months ago
Sci-Fi Babe in TV or Film (25 characters items)