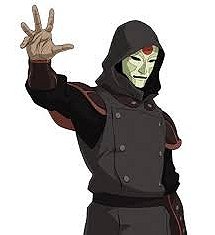 View all Amon pictures (3 more)
Amon, born as Noatak, was the charismatic and mysterious leader of an anti-bender revolutionary group known as the Equalists. Their ultimate goal was to introduce equality for all by permanently ridding the world of benders. A nimble, agile, and stealthy fighter, Amon was fearless in facing his opponents, regardless of their powerful bending skills and abilities.

Claiming to be an innocent non-bender to whom the spirits granted the ability to remove a person's bending permanently, a power previously demonstrated only by the Avatar, Amon gained the confidence and support of many people with the same ideals. However, when the complete conquest of Republic City by the Equalists became imminent, Amon's true identity was exposed to the public by Avatar Korra. In actuality, he was a prodigious Northern Water Tribe bloodbender, son of the escaped crime boss, Yakone. Alongside his younger brother, the former councilman, Tarrlok, Amon was unknowingly shaped by Yakone to be a tool for his revenge against the Avatar.