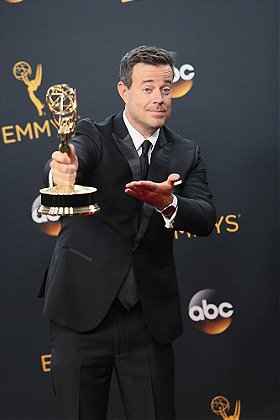 Daly was born in Santa Monica, California, the son of Coachella Valley TV personality Pattie Daly Caruso, and actor J. D. Daly. Daly attended Santa Monica High School and was a member of the school's golf team before graduating in 1991. He attended Loyola Marymount University in Los Angeles. He is of Irish descent and has worked with Guinness on local "Proposition 3-17" to make Saint Patrick's Day an official holiday. Carson Daly hosted MTV'S TRL from 1998-2002.

In 2002, Last Call with Carson Daly went on the air. The show was shot on the same set as Saturday Night Live. It has since taken on a rogue documentary style format taping shows on the road.

In 2011, Daly began hosting the NBC singing competition The Voice in which contestants will sing for the four coaches for a shot at a record deal and $100,000. He hosted the Blind Auditions, the Battle and Knockout Rounds, and the live shows twice a week (Mondays and Tuesdays).

In addition to hosting The Voice, Daly also hosted his very own New Year's Eve special on NBC, live from Times Square. He provides the commentary on what's happening during the celebration including the famous ball drop. The show premiered on December 31, 2003 and in addition to hosting, he also has his very own timer named after him called "Carson's Countdown".

Carson Daly plays a small but pivotal role in the first episode of My Name Is Earl. While in the hospital after being hit by a car, Earl learns about karma from watching an episode of Last Call with Carson Daly where Daly claims that his success is a direct result of doing good things for other people. Earl is thus inspired by Carson Daly to turn his own life around, and sets out to make up for his many past wrongs. Carson Daly also had a small role on Dave Chappelle's show Chappelle's Show.

Carson is a founding partner with Jonathan Rifkind, Jonathan B. Davis and Bam Margera of 456 Enterprise & Entertainment which released the "Viva La Bands" compilations.

Daly also has a production company, which produced his New Year's Eve special on NBC.

Brian G added this to a list 4 years, 9 months ago
My Favorite Talk Show Hosts of All Time (46 person items)

Holy Godiva added this to a list 6 years, 6 months ago