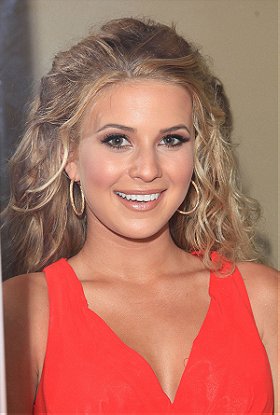 Caroline Sunshine was born on September 5, 1995 in Atlanta, Georgia. She was raised in Orange County, California, and has two younger brothers. Sunshine began studying ballet at the age of 3.

In 2006, Sunshine began going to professional auditions at the age of 11, and landed her first role in a commercial for Amazing Allysen the talking doll, as well as commercial work for Yoplait Go-Gurt, and Cap'n Crunch. In 2010, Sunshine filmed her first pilot for the CBS sitcom, Team Spitz, co-starring as the teenage daughter of a high school coach played by Rob Riggle of The Daily Show with Jon Stewart. In the summer of that same year, she gained popular notoriety for her role as Barbara Winslow in her first feature film, Marmaduke, based on the comic strip of the same name.

In the fall of 2010, Sunshine landed what would become a co-starring role on the Disney Channel original series, Shake It Up as European exchange student, Tinka Hessenheffer alongside Kenton Duty as her flamboyant twin brother, Gunther Hessenheffer. The glitzy brother/sister duo of Gunther and Tinka is said to be inspired by Ryan and Sharpay Evans of Disney's High School Musical franchise. She was a recurring cast member during the first season, but was promoted to the regular characters for the second and third season. The series ended in November. ... (more) (less)
Tags: Born 1995 (3), Brown Eyes (1), American (1), Actress (1), Blonde (1), Born In 1995 (1), P (1), 1 ** (1)
My tags:

Smiler1 voted for an image 1 month, 2 weeks ago

gohogs voted for an image 8 months ago

cekadidas voted for 22 images [View All] 1 year ago

Magdalena added this to a list 1 year, 1 month ago
Actresses (374 person items)

joseph voted for 2 images 2 years ago

chance voted for an image 3 years, 3 months ago

Radek voted for an image 3 years, 11 months ago