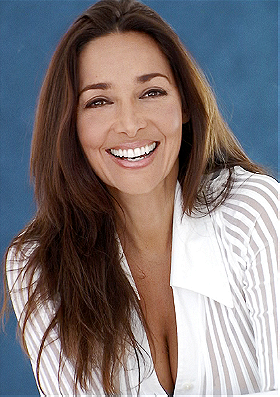 Davis was born in London to a French mother and American father. She grew up in England, Scotland, France, Italy and Thailand and moved to New York City as a teenager. Carole attended the City University of New York and majored in Chinese studies and political science. After university she attended the two-year programme at the Lee Strasberg Theatre and Film Institute.

As a singer/song-writer and recording artist, Carole was signed to Warner Bros. Records in 1989. Her record “Heart of Gold” was produced by Nile Rodgers. Her single “Serious Money” (a cover of The O'Jays hit "For the Love of Money") was a Dance hit and the video was number one and became the official theme song to a new hip-hop music video show called Rap City on BET. She toured Europe and Asia and performed in clubs throughout the U.S. Carole wrote the song “Slow Love” with Prince for his Grammy Award nominated album “Sign O’ the Times.” She recorded her own version of the song for Warner Brothers records. She subsequently left Warners' in 1993 and moved to Atlantic Records, where she self-produced and wrote the album I’m No Angel. As a song-writer, Carole made a publishing deal, signing with MCA. She was signed to Sony France for Europe.

Davis also works as an actress. Her first feature film was in the 1981 horror film Piranha II: The Spawning. Later on in the 1980s, she appeared in the 1984 comedy film The Flamingo Kid, her best known film role came in 1987 as Roxie Shield in the cult comedy film Mannequin. She later also appeared in films such as the 1990 comedy The Shrimp on the Barbie, the 1991 comedy If Looks Could Kill and The Rapture, in the same year.

Carole had guest appearances in television shows such as The A-Team, Angel, Sex & The City & Star Trek: Voyager.

Most recently, Davis appeared in Going the Distance as well as several appearances on 2 Broke Girls.

Apart from singing and acting, Davis is also a writer. She wrote a series of articles on anti-Semitism in Europe for the Jewish Journal. As a novelist, she is the author of The Diary of Jinky, Dog of a Hollywood Wife (Andrews McMeel Publishing), a non-fiction humour book about Hollywood excess and human status anxiety written from the point of view of a death-row dog. She is an investigative journalist for American Dog Magazine for which she has written a series of articles about cruelty in the pet trade. She has an animal welfare column on Newsvine.com and is the author of the popular “Hollywood Dog Blog” at [Link removed - login to see]. Davis is also the West Coast Director of the Companion Animal Protection Society, a national non-profit organisation that investigates puppy mills and pet stores ([Link removed - login to see]. ... (more) (less)
Tags: Actress (2), Brunette (1), British (1)
My tags:

dvirgueza voted for an image 2 years, 9 months ago