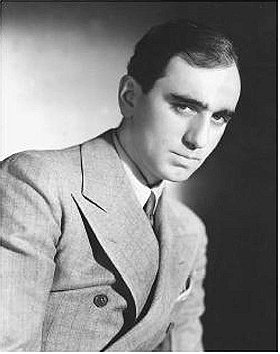 At first in Hollywood Berkeley wasn't satisfied with the possibilities of his job--at the time, dance directors trained the dancers and staged the dances. The director chose camera positions and the editor chose which of the takes were shown to the audience. Berkeley wanted to direct the dances himself and convinced producer Samuel Goldwyn to let him try. One of the first chances he took was that he used only one camera in his films. He also showed close-ups of the chorus girls. Asked about this, he explained, "Well, we've got all the beautiful girls in the picture, why not let the public see them?" With the decline of musicals in 1931 and 1932, he was thinking of returning to Broadway when Darryl F. Zanuck, chief producer at Warner Brothers, called him in to direct the musical numbers of Warners' newest project, the backstage drama 42nd Street (1933). Berkeley accepted and directed great numbers like "Shuffle Off To Buffalo", "Young and Healthy" and the grandiose story of urban life, the finale "42nd Street". The film was a smash hit, and Warner Brothers knew who made it such an extraordinary success--Berkeley, as well as composer Harry Warren and lyricist Al Dubin, got seven-year contracts. Berkeley created musical numbers for almost every great musical that Warner Brothers produced from 1933 to 1937. His overhead shots forced him to drill holes in the studio roofs, and he used more dancers with each succeeding picture. However, by the late 1930s the musical was in decline once again, and Berkeley had nothing to do as a choreographer. He directed two non-musical pictures for Warner Brothers then went to MGM, where he choreographed the final number from Broadway Serenade (1939) with Jeanette MacDonald. As a director and choreographer he worked on four pictures with teenage stars Judy Garland and Mickey Rooney. He also choreographed the "Fascinatin' Rhythm" finale for MGM's reigning tapping star, Eleanor Powell in Lady Be Good (1941). He directed Gene Kelly in his first picture, For Me and My Gal (1942). Kelly, who choreographed his own numbers, learned a lot from Berkeley.

Berkeley worked for 20th Century-Fox in The Amazing Mr. Forrest (1939) with its surrealistic number "The Lady in the Tutti-Frutti Hat". In 1949 he directed his last picture, Take Me Out to the Ball Game (1949), but this time the choreography was by Gene Kelly. Berkeley did a few numbers in the early 1950s but, by the end of the decade, he was all but forgotten. A revival of his films in the late 1960s brought him some popularity and he was asked to return to Broadway and supervise the dance direction in the revival of a Vincent Youmans musical comedy from 1925. One of the actresses in this production was Ruby Keeler, one of his leading ladies in Warner musicals. When the production went on tour in 1972, one of the road cast was Eleanor Powell. The production was a smash hit. When he walked on stage after one opening night, the house exploded with applause.

A strange fact is that Busby Berkeley never had a dancing lesson and, in his early days, was very afraid of people finding out. He often drove his producers crazy when he gave orders to build a set and then sat in front of it for a few days, thinking up the numbers. ... (more) (less)
My tags: