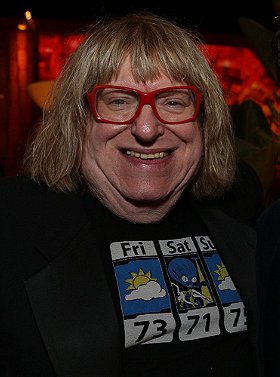 Vilanch was born in New York City and raised in Paterson, New Jersey. When he was four days old, he was adopted by Dr. Jonas Vilanch, an optometrist, and his wife Henne, a housewife. Having her own theatrical aspirations, Mrs. Vilanch helped launch her son's show business career by getting him signed on with Lane Bryant's Charming Chub division as a chubby child model. Upon graduating from high school, Vilanch attended The Ohio State University as a theater and journalism student. While there, he appeared in student theater productions and wrote reviews, hoping it would be the beginning of a career as a playwright. In 1999 Vilanch stated, "I was going to be Neil Simon, batting out one Broadway show after another." ... (more) (less)
Tags: Gay (1), Lgbt (1), American (1), Actor (1), Eccentric (1), Songwriter (1), Fat (1), Born 1948 (1), Comedy Writer (1), Bangs (1), Honey Monster (1)
My tags:

3. Amsel: Illustrator of the Lost Art