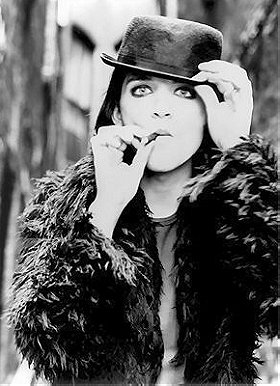 While Molko was brought up in a strict household that disapproved of artistic expression (his father wanted him to become a banker) he rebelled by affecting an androgynous image, wearing nail polish, lipstick and eyeliner, and listening to punk. Molko initially attended the European School of Luxembourg but had to leave due to excessive bullying; he later attended the American International School of Luxembourg (AISL) and went on to study drama at Goldsmiths College in London.

Molko and Stefan Olsdal had both attended AISL (though they were never friends);
when Molko moved to London, he ran into Olsdal at South Kensington tube station and invited him to one of his gigs in a club, which he played with Steve Hewitt.
During a XFM takeover show in December 2009 Molko mentioned that his biggest influence is Sonic Youth and Nirvana, and that his band probably wouldn't exist without them. Placebo have frequently performed Nirvana song "All Apologies" in live concerts. He also mentioned that at the age of six, Kiss was the first band he ever fell in love with. Other musical influences include Depeche Mode, David Bowie, Iggy Pop, dEUS, Dead Kennedys, the Beastie Boys, Serge Gainsbourg, PJ Harvey, The Velvet Underground, Joy Division, Sonic Youth, The Stooges, Siouxsie and Pixies. More recent musical tastes include electro-clash artist Peaches, Neil Patrick Howlett, Young Astronauts Club, Queens of the Stone Age, Mogwai, The Cribs, Sad Gray and many others.

Molko taught himself to play guitar at the age of 16, he got a Telecaster replica as a present from a french friend. Soon after, he bought a real Telecaster. He plays other instruments such as bass, harmonica, keyboard, saxophone, drums and turntables. Fluent in French due to his upbringing in Belgium and Luxembourg, Molko has written and sung a few of Placebo's songs in French as well as English. He has also occasionally worked as a DJ at clubs .

Along with Hewitt and Olsdal, he had a role in the 1998 film Velvet Goldmine,
for which Placebo performed the T.Rex song "20th Century Boy". He played Malcolms, a singer of the fictional glam rock band, "The Flaming Creatures", who resembled the early Alice Cooper band.
Molko has been open about his use of recreational drugs; in a 1997 interview with New York Doll, he admitted at one point that heroin was "probably the only drug on this planet I haven’t tried."
However, he later admitted to experimenting with heroin as well.
The band holds that the drug references within their music reflect the nature of current times, and the removal of such references would deteriorate the meaningfulness of their work.
In October 2005, Molko's then-partner Helena Berg gave birth to his first child, Cody. As of June 2009, (as stated in an interview) he and Helena are no longer together. Molko stated in a recent interview that he still sees his son frequently.

In the same year, he was voted 4th of the 50 sexiest rock stars by Kerrang! magazine readers.

lovedriver voted for an image 3 weeks, 1 day ago

Palermo Sicily voted for an image 4 months, 1 week ago

tijtij voted for an image 9 months, 1 week ago

Darthmasco added this to a list 2 years, 4 months ago
Sagittarius (277 person items)

Seymour voted for an image 2 years, 7 months ago

pamela added this to a list 2 years, 8 months ago
My Favorite Vocalists (35 person items)

pamela voted for an image 3 years, 2 months ago

buenaslistas added this to a list 4 years, 8 months ago
Database (410 person items)

Eleanor voted for an image 6 years, 2 months ago