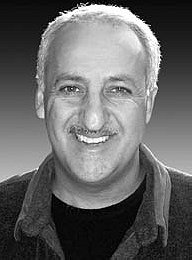 (MEN IN TIGHTS) and, of course, EMPLOYEE OF THE MONTH. On television he has been seen on SEINFELD, STAR TREK (DS9 and VOYAGER), and the incredibly short-lived REGULAR JOE with Daniel Stern and Judd Hirsch. Currently he can be seen regularly on TNT's smash summer hit 'SAVED' (with Tom Everett Scott) as well as on USA's smash summer hit 'SO NOTORIOUS' (with Tori Spelling). He has lent his voice to countless cartoons for Warner Bros., Disney and DreamWorks, among others. He lives in Los Angeles with his wife and two children and, in the never ending quest to find his voice, has taken up Mime. ... (more) (less)
Tags: Seinfeld (2), Male (2), Actor (2), Hilarious (1), T.v. (1), Born 1952 (1), Babu (1), Ghost World (1), Pushpop (1)
My tags: