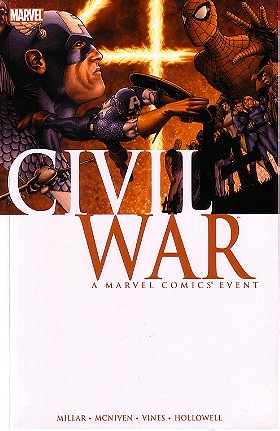 The landscape of the Marvel Universe is changing, and it's time to choose: Whose side are you on? A conflict has been brewing from more than a year, threatening to pit friend against friend, brother against brother - and all it will take is a single misstep to cost thousands their lives and ignite the fuse! As the war claims its first victims, no one is safe as teams, friendships and families begin to fall apart. The crossover that rewrites the rules, Civil War stars Spider-Man, the New Avengers, the Fantastic Four, the X-Men and the entirety of the Marvel pantheon! Collects Civil War #1-7, plus extras.
Manufacturer: Marvel Comics
Release date: 25 April 2007
ISBN-10 : 078512179X | ISBN-13: 9780785121794
Tags: Superhero (1), Trade Paperback (1)
My tags:

Schizoidsudaca rated this 5/10 3 weeks, 3 days ago

Agent Kermit D. Fonz added this to a list 3 months, 2 weeks ago

"Writer: Mark Millar Penciller: Steve McNiven Inker: Dexter Vines Colorist: Morry Hollowell Published: June, 2006 - January, 2007 Publisher: Marvel Comics Number of Pages: 208 "Doesn't matter what the politicians or the mobs say. Doesn't matter if the whole country decides that something WRONG is something RIGHT. This nation was founded on one principle above all else: the requirement that we stand up for what we believe, no matter the odds or the consequences. When the mob and the press a"

Bruno added this to wanted list 2 years, 4 months ago

JulienDankBoy rated this 2/10 3 years, 2 months ago

PCA added this to a list 3 years, 7 months ago
Comics leídos. (57 comicbooks items)

aleusi added this to wanted list 4 years, 5 months ago

Oscar Mayer added this to wanted list 4 years, 9 months ago

jolyneaznable rated this 4/10 5 years ago

lucamilitone added this to wanted list 5 years, 2 months ago