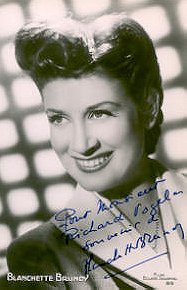 She was the goddaughter of writer Georges Duhamel. As a young girl she studied acting at the Conservatoire de Paris. Blanchette Brunoy was married twice to both actors Robert Hommet (?–1958) and Maurice Maillot (1961–1968) until their death. ... (more) (less)
My tags: