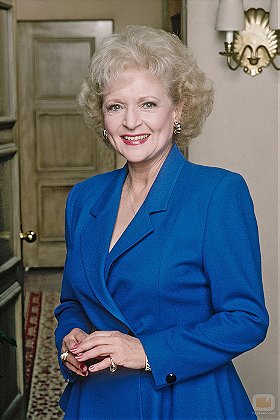 Although best known as the devious Sue Ann Nivens on the classic sitcom Mary Tyler Moore (1973-1977) and the ditzy Rose Nylund on The Golden Girls (1985-1992), Betty White had been in television for a long, long time before those two shows, having had her own series, Life with Elizabeth (1952).

The widow of TV game-show host Allen Ludden, she has been inducted into the Television Hall of Fame and is known for her tireless efforts on behalf of animals.

James L. Brooks offered her the role of Helen Hunt's mother in As Good as It Gets (1997). She turned it down because she objected to the treatment of the dog in the film.

Per her autobiography, White was named "Betty" at birth not "Elizabeth" because her parents did not want her to be saddled with any of the nicknames and derivatives of Elizabeth -- i.e. Beth, Liza, Ellie, etc.

Moved to Los Angeles when she was only two years old.

Is an avid Animal Rights activist and is a sponsor for Farm Animal Reform Movement and Friends of Animals.

Is strongly critical of reality television.

Admits to having surgery before "The Golden Girls" (1985), even though the program was about growing old and not having a problem with it.

Is of German and Greek ancestry.

Is an avid animal welfare activist and works with a number of organizations; including the Los Angeles Zoo Commission, the Morris Animal Foundation, and Actors & Others for Animals.

Betty was originally considered for the role of the sexpot, "Blanche," on "The Golden Girls" (1985). However, Betty had already been the aggressive "Sue Ann Nivens" on "Mary Tyler Moore" (1970) and Rue McClanahan had played the introverted "Vivian" on "Maude" (1972). It was thought best not to have these two actresses reprise similar characters. Therefore, Betty got the part of naive "Rose Nylund" and Rue played the oversexed "Blanche".

Was portraying the conniving, gold-digging Ellen Harper, the niece of Rue McClanahan, who played the prudish Aunt Fran, On "Mama's Family" (1983) at the same time as they were working together on "The Golden Girls" (1985) in almost opposite roles.

Received a star on the Hollywood Walk of Fame in 1988. The star is next to her late husband, Allen Ludden,'s star.

Made several appearances on "Santa Barbara" (1984) as part of a contest.

In 1955, Betty was the honorary mayor of Hollywood, California.

With Rue McClanahan's death in June 2010, White became the last surviving member of the four "The Golden Girls" (1985).

2. The History of Comedy

4. Bringing Down the House

2. Together: A Story of Shared Vision

4. Alive Day: A Story of Love and Loyalty

5. Here We Go Again: My Life in Televison
View all Betty White books

3. Alive Day: A Story of Love and Loyalty

4. Together: A Story of Shared Vision

5. Here We Go Again: My Life in Televison
View all Betty White books

stageactress added this to a list 2 weeks, 1 day ago
Childless women (165 person items)

Monstermaster added this to a list 3 months, 1 week ago
Deceased celebrities i love. (66 person items)

Henny voted for 2 images 10 months ago

parryj voted for an image 10 months ago

TrekMedic voted for 8 images [View All] 10 months ago

moviebuff added this to a list 11 months, 1 week ago
Entertainers Whom We Miss (122 person items)

ROADKILL41 voted for an image 1 year, 5 months ago

fantazjusz voted for 9 images [View All] 4 years, 3 months ago

aLittleTyger voted for an image 4 years, 5 months ago