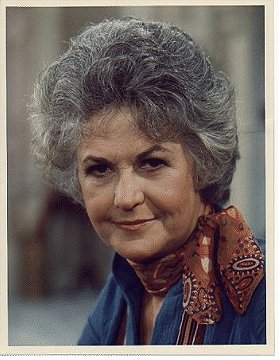 In 1966, she went to work on a new Broadway musical, "Mame", directed by her second husband, Gene Saks, winning a Tony Award for the featured role of Vera Charles. The show's star, Angela Lansbury, also won a Tony Award, and she and Bea became lifelong friends. In 1971, Arthur appeared on the hit sitcom All in the Family (1971) as Maude Findlay, Edith Bunker's cousin, who was forever driving Archie Bunker crazy with her liberal politics. The guest appearance led to Bea's own series entitled Maude (1972). The show was a hit, running for six years, during which many controversial topics of the time, including abortion, were tackled, and Bea won her first Emmy Award. While doing Maude (1972), Bea repeated the role of Vera Charles in the film version of Mame (1974), again directed by Gene Saks, but it was a dismal flop. She also appeared on The Star Wars Holiday Special (1978). While playing "Maude," she raised her two adopted sons with then-husband Gene Saks. After the show ended, so did Bea's marriage to Saks. She never remarried, and became a lifelong animal rights' activist.

In 1983, she started working on a new sitcom, Amanda's (1983), patterned after Britian's"Fawlty Towers" (1975)_, but it was short-lived. In 1985, came what many consider the highlight of Bea Arthur's career, when the sitcom"The Golden Girls" (1985)_ made its debut. Co-starring Betty White, Rue McClanahan and Estelle Getty, the show was about the lives of three middle-aged women, and one's elderly mother, (played by Getty, who was actually younger than White and Arthur), living in Miami. It was an immediate hit, running for seven seasons. All of the cast members, including Bea, won Emmy Awards during the show's run. It's worth noting that"Maude" (1972)_ and"The Golden Girls" (1985)_ were canceled when Bea announced she was leaving. She left when she thought each show was at its peak. The producers realized the shows wouldn't be the same without her. In 1992, The Golden Girls (1985) was canceled. Bea kept a low profile, appearing in only two movies: For Better or Worse (1995) and Enemies of Laughter (2000).

In 1999, she made a very successful and welcome appearance at The N.Y. Friars Club Roast of Jerry Stiller (1999). She did a one-woman stage show in 2001, for which she received a Tony Award nomination. In 2003, she reunited with Betty White and Rue McClanahan for The Golden Girls (1985) reunion special on the Lifetime Channel. Noticeably absent was supporting actress Estelle Getty, who was ill. The three lead actresses made appearances together for the rest of the decade to promote DVD releases of The Golden Girls (1985). They appeared together for the last time in 1998, at the TV Land Awards, where they received a standing ovation as they accepted the Pop Culture Award. Bea then attended, with Angela Lansbury, when she was inducted to the Academy of Television Arts and Sciences Hall of Fame.

Agent Kermit D. Fonz added this to a list 2 weeks, 6 days ago

rose77 added this to a list 6 years, 1 month ago
Favorite Celebrities Born in the Northeast (139 person items)