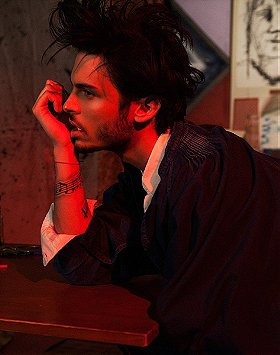 In a dispersed male model market one of the world's most powerful fashion figures (initials KL) makes a stand and anoints Baptiste Giabiconi as the "One". Think multiple campaigns two seasons running, some serious time in the media spotlight and a big rush of buzz and talk. World, meet Baptiste Giabiconi.

Giabiconi's face shot to fame thanks to his toyboy role in the summer 2009 Chanel accessories campaign photographed by Karl Lagerfeld. He was accompanied by Jerry Hall, in an ad campaign that catapulted him to fame.

Karl Lagerfeld was struck by his good looks: he made Giabiconi the star of his latest Chanel Cruise ad campaign, which had Venice in the background, and made him a toyboy in the Fendi campaign too.

4. Once and Forever (2015)
View all Baptiste Giabiconi movies

4. The Tale of a Fairy
View all Baptiste Giabiconi movies

Darthmasco added this to a list 1 year, 7 months ago
Scorpio (310 person items)

Stepan_Kant added this to a list 3 years, 11 months ago
Favorite Person (20 person items)

matt added this to a list 5 years, 6 months ago
Most beautiful men on earth (200 person items)

franceseattle rated this 3/10 5 years, 6 months ago