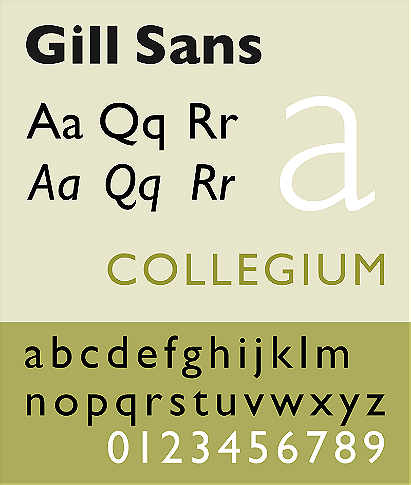 View all Gill Sans pictures
Gill Sans is a sans-serif typeface designed by Eric Gill and released by the British branch of Monotype from 1928 onwards.

Gill Sans is based on Edward Johnston's 1916 "Underground Alphabet", the corporate font of London Underground. Gill as a young artist had assisted Johnston in its early development stages. In 1926, Douglas Cleverdon, a young printer-publisher, opened a bookshop in Bristol, and Gill painted a fascia for the shop for him in sans-serif capitals. In addition, Gill sketched an alphabet for Cleverdon as a guide for him to use for future notices and announcements. By this time Gill had become a prominent stonemason, artist and creator of lettering in his own right and had begun to work on creating typeface designs.

Gill was commissioned to develop his alphabet into a full metal type family by his friend Stanley Morison, an influential Monotype executive and historian of printing. Morison hoped that it could be Monotype's competitor to a wave of German sans-serif families in a new "geometric" style, which included Erbar, Futura and Kabel, all being launched to considerable attention in Germany during the late 1920s. Gill Sans was released in 1928 by Monotype, initially as a set of titling capitals that was quickly followed by a lower-case. Gill's aim was to blend the influences of Johnston, classic serif typefaces and Roman inscriptions to create a design that looked both cleanly modern and classical at the same time.

Marketed by Monotype as a design of "classic simplicity and real beauty", it was intended as a display typeface that could be used for posters and advertisements, as well as for the text of documents that need to be clearly legible at small sizes or from a distance, such as book blurbs, timetables and price lists. Designed before setting documents entirely in sans-serif text was common, its standard weight is noticeably bolder than most modern body text fonts.

An immediate success, the year after its release the London and North Eastern Railway (LNER) chose it for all its posters, timetables and publicity material. British Railways chose Gill Sans as the basis for its standard lettering when the railway companies were nationalised in 1948. Gill Sans also soon became used on the modernist, deliberately simple covers of Penguin Books, and was sold up to very large sizes which were often used in British posters and notices of the period. Gill Sans was one of the dominant typefaces in British printing in the years following its release, and remains extremely popular: it has been described as "the British Helvetica" because of its lasting popularity in British design. Gill Sans has influenced many other typefaces, and helped to define a genre of sans-serif, known as the humanist style.