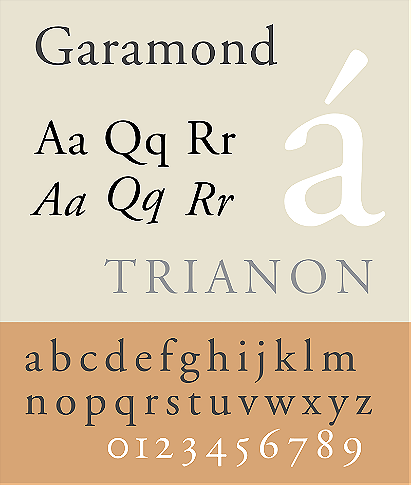 View all Garamond pictures
Garamond is a group of many old-style serif typefaces, named for sixteenth-century Parisian engraver Claude Garamond (generally spelled as Garamont in his lifetime). Garamond-style typefaces are popular and often used, particularly for printing body text and books.

Garamond worked as an engraver of punches, the masters used to stamp matrices, the moulds used to cast metal type. His designs followed the model of an influential design cut for Venetian printer Aldus Manutius by his punchcutter Francesco Griffo in 1495, and helped to establish what is now called the old-style of serif letter design, letters with a relatively organic structure resembling handwriting with a pen, but with a slightly more structured and upright design.

Some distinctive characteristics in Garamond's letterforms are an 'e' with a small eye and the bowl of the 'a' which has a sharp hook upwards at top left. Other general features are limited but clear stroke contrast and capital letters on the model of Roman square capitals. The 'M' is slightly splayed with outward-facing serifs at the top (sometimes only on the left) and the leg of the 'R' extends outwards from the letter. The x-height (height of lower-case letters) is low, especially at larger sizes, making the capitals large relative to the lower case, while the top serifs on the ascenders of letters like 'd' have a downward slope and ride above the cap height. The axis of letters like the ‘o’ is diagonal and the bottom right of the italic 'h' bends inwards.

Following an eclipse in popularity in the eighteenth and nineteenth century, many modern revival faces in the Garamond style have been developed. It is common to pair these with italics based on those created by his contemporary Robert Granjon, who was well known for his proficiency in this genre. However, although Garamond himself remains considered a major figure in French printing of the sixteenth century, historical research has increasingly placed him in context as one artisan punchcutter among many active at a time of rapid production of new typefaces in sixteenth-century France, and research has only slowly developed into which fonts were cut by him and which by contemporaries. As a result, while "Garamond" is a common term in the printing industry, the terms "French Renaissance antiqua" and "Garalde" have been used in academic writing to refer generally to fonts on the Aldus-French Renaissance model by Garamond and others. In particular, many 'Garamond' revivals of the early twentieth century are actually based on the work of a later punch-cutter, Jean Jannon, whose noticeably different work was for some years misattributed to Garamond. Modern Garamond revivals also often add a matching bold and 'lining' numbers at the height of capital letters, neither of which were used during the Renaissance.

The most common digital font named Garamond is Monotype Garamond. Developed in the early 1920s and bundled with many Microsoft products, it is a revival of Jannon's work.