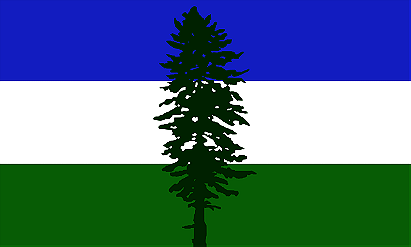 View all Doug Flag pictures
The Doug flag, also referred to as the Cascadian flag or the Cascadia Doug flag and nicknamed "Old Doug" or simply "the Doug", is one of the primary symbols and an unofficial flag of the Cascadia bioregion, which roughly encompasses the U.S. states of Oregon and Washington, the Canadian province of British Columbia, and other parts of North America's Pacific Northwest. It was designed by Portland, Oregon native Alexander Baretich in the academic year of 1994-1995. It is named after the Douglas fir, featured on the flag.

The flag is a tricolor consisting of three horizontal stripes of blue, white, and green, charged with a single Douglas fir tree in the center. The blue stripe represents the sky, Pacific Ocean and Salish Sea; the white represents clouds and snow; and the green represents the region's fields and evergreen forests. The tree symbolizes "endurance, defiance and resilience against fire, flood, catastrophic change and even against the anthropocentric Man".

Since its inception, Baretich's design has gained popularity and earned status as the unofficial flag of Cascadia. In 2014, Kelton Sears of Vice Media said the flag "quickly became the dominant symbol of the nascent Cascadian identity", appearing on microbreweries' beer labels and at local events, including Portland Timbers games, gay pride parades, environmental protests, and activities affiliated with the Occupy movement. The flag appears on boxes of beer from Phillips Brewing in Victoria, British Columbia. The Seattle-based folk band Fleet Foxes included the flag on the back of their 2011 studio album Helplessness Blues.

In 2015, Baretich expressed his hope that his designs "will not be used for hate, exploitation, and against the values or principles of bioregionalism". Furthermore, he said, "In seeking out a bioregional flag, I believe that it's the bioregion that will capture the artist—not the artist capturing the bioregion."