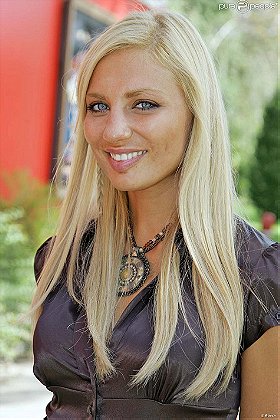 After being animator on the series "Opération séduction aux Caraïbes" (an adaptation of the Harem TV show), Ariane was columnist on a talk show hosted by Elsa Fayer on Fun TV.

Then Ariane began co-presenting a new edition of "Morning Live" on Fun TV with Cyril Hanouna.

After a meteorology course, she became weather girl on M6. During this time, Ariane also hosted these programs:

For 2 years, Ariane had been hosting two music programs on M6:

Ariane presented a program "One Day With". In this program, she was spending a day in the life of a singer.

On 2 August 2008, Ariane left M6 Channel. In September, she joined France 2 where she works as a columnist in Julien Courbet's program "Service Maximum". ... (more) (less)
Tags: Journalist (1)
My tags:

Kat M added this to Rated list 2 years, 10 months ago

TrekMedic voted for an image 3 years ago

jojoba voted for an image 3 years, 8 months ago

Akorias voted for an image 4 years, 10 months ago

franceseattle voted for an image 5 years ago

vtd voted for an image 5 years, 3 months ago

Kat M added this to a list 5 years, 6 months ago
Beautiful Girls Around the World (8846 person items)