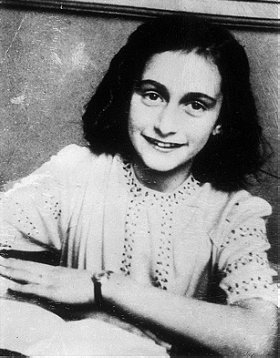 26 votes
People I would like to meet. Living and Dead (148 items)
list by SwornShadow
Published 10 years, 3 months ago

For the first 5 years of her life, Anne lived with her parents and older sister, Margot, in an apartment on the outskirts of Frankfurt. After the Nazi seizure of power in 1933, Otto Frank fled to Amsterdam in the Netherlands, where he had business connections. The rest of the Frank family followed Otto, with Anne being the last of the family to arrive in February 1934 after staying with her grandparents in Aachen.

The Germans occupied Amsterdam in May 1940. In July 1942, German authorities and their Dutch collaborators began to concentrate Jews from throughout the Netherlands at Westerbork, a transit camp near the Dutch town of Assen, not far from the German border. From Westerbork, German officials deported the Jews to Auschwitz-Birkenau and Sobibor killing centers in German-occupied Poland.

During the first half of July, Anne and her family went into hiding in an apartment which would eventually hide four Dutch Jews as well -- Hermann, Auguste, and Peter van Pels, and Fritz Pfeffer. For two years, they lived in a secret attic apartment behind the office of the family-owned business at 263 Prinsengracht Street, which Anne referred to in her diary as the Secret Annex. Otto Frank's friends and colleagues, Johannes Kleiman, Victor Kugler, Jan Gies, and Miep Gies, had previously helped to prepare the hiding place and smuggled food and clothing to the Franks at great risk to their own lives. On August 4, 1944, the Gestapo (German Secret State Police) discovered the hiding place after being tipped off by an anonymous Dutch caller.

That same day, Gestapo official SS Sergeant Karl Silberbauer and two Dutch police collaborators arrested the Franks; the Gestapo sent them to Westerbork on August 8. One month later, in September 1944, SS and police authorities placed the Franks, and the four others hiding with the Franks, on a train transport from Westerbork to Auschwitz, a concentration camp complex in German-occupied Poland. Selected for labor due to their youth, Anne and her sister, Margot were transferred to the Bergen-Belsen concentration camp near Celle, in northern Germany in late October 1944.

4. The Diary of a Young Girl: Definitive Edition

1. The Diary of Anne Frank

2. The Attic: The Hiding of Anne Frank

4. The Diary of Anne Frank
View all Anne Frank tv

1. The Attic: The Hiding of Anne Frank

2. The Diary of Anne Frank

4. The Diary of Anne Frank
View all Anne Frank tv

DylanGreson22 voted for an image 1 year, 7 months ago

Darthmasco added this to a list 1 year, 9 months ago
Gemini (244 person items)