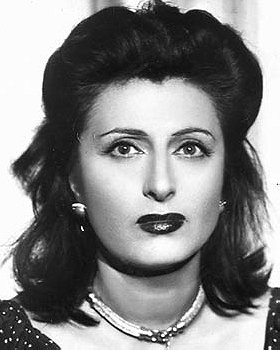 124 votes
They talk with their eyes (100 items)
list by jeffpsych
Published 9 years, 2 months ago

In 1955 she went to Hollywood, and starred in the film version of Tennessee Williams' The Rose Tattoo, for which she won the Academy Award for Best Actress. In 1957, she was nominated for Best Actress for Wild is the Wind. She also starred in The Secret of Santa Vittoria.

Magnani had celebrated love affairs, with director Roberto Rosselini and with actor Massimo Serato, with whom she had a son, who was stricken with polio. Her single marriage, to director Goffredo Alessandrini, did not last long.

Kendraatje posted a image 1 year ago

CD Smiles voted for an image 2 years, 9 months ago

MacGuffin voted for 9 images [View All] 4 years, 3 months ago

jazzybop voted for 10 images [View All] 4 years, 3 months ago

xolmis added this to a list 4 years, 7 months ago
Tribute to Glamorous Actresses of the Yesterday (257 person items)