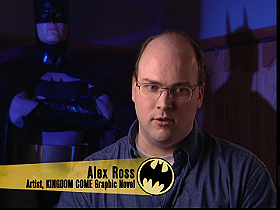 Ross' style has been said to exhibit "a Norman-Rockwell-meets-George-Pérez vibe", and has been praised for its realistic, human depictions of classic comic book characters. His rendering style, his attention to detail, and the perceived tendency of his characters to be depicted staring off into the distance in cover images has been satirized in Mad magazine. Because of the time it takes Ross to produce his art, he primarily serves as a plotter and/or cover artist. ... (more) (less)
Tags: Illustrator (2), Painter (2), American (1), Artist (1), Earth X (1), Born 1970 (1), Born In 1970 (1), Born In January (1), Spider-man 2 (1), Concept Artist (1), Kingdom Come (1)
My tags:

1. Heart of a Hero: A Tribute to Christopher Reeve

4. Legends of the Dark Knight: The History of Batman

2. Heart of a Hero: A Tribute to Christopher Reeve

3. Legends of the Dark Knight: The History of Batman

boogiepop1989 posted a image 7 months ago

indianastar added this to a list 2 years, 1 month ago

"took a picture with him and autograph"