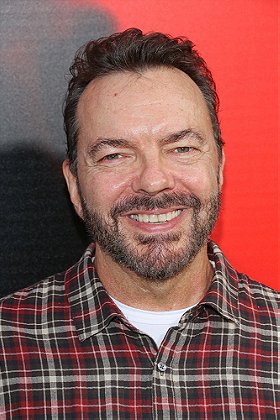 He is particularly notable for writing American Beauty and for creating Six Feet Under and True Blood, work which earned him an Academy Award, an Emmy, and awards from the Writers, Directors, and Producers Guilds.

Ball was born in Marietta, Georgia, to Frank and Mary Ball, an aircraft inspector and a homemaker. His older sister, Mary Ann, was killed in a car accident when Ball was 13; he was in the passenger seat at the time. He attended high school in Marietta, and went on to attend the University of Georgia and Florida State University, from which he graduated in 1980 with a degree in theater arts. After college, he began work as a playwright at the General Nonsense Theater Company in Sarasota, Florida. ... (more) (less)
Tags: American (3), Writer (2), Director (2), Gay (1), Male (1), Producer (1), U (1), Actor (1), Playwright (1), Screenwriter (1), American Beauty (1), Born 1957 (1), True Blood (1), Story Editor (1)
My tags:

4. All Signs of Death
View all Alan Ball TV

3. All Signs of Death