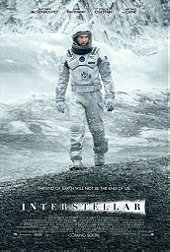 Second hour: Lots of bad editing cutting back and forth between Earth and the space expedition. These cuts are often extremely rapid and have a terrible affect on pacing. Much of the action is high stakes docking maneuvers. Matt Damon shows up just long enough to inject some clumsy dialogue about human survival instinct, completely tipping his hand that he's about to go batshit.

Third hour: A bad Outer Limits episode. The hokey mysticism is explained (with the Christopher Nolan trademark WAY TOO MUCH FUCKING EXPOSITION SO ALL THE IDIOTS KNOW WHAT'S GOING ON) but it doesn't matter how much they try to make it sound scientific, it's still just a deus ex machina channeled through the power of LOVE. The main character and the human race are saved because... plot says so.

On top of those glaring flaws we get the other Nolan trademark, an overbearing soundtrack that rarely, if ever, lets up. It was also amazing how little he was able to coax out of an all-star cast of actors. There's a reason that great sci-fi films tend to have little-known actors, and it's because the material is strong enough to stand on its own without relying on star power. This was clearly not the case for Interstellar.

There is little to nothing under the hood to analyze here. Like Inception, this movie throws lots of concepts at the audience (only this time it's mostly well understood physics instead of hypothetical dream experiments) and many people mistake this for depth.

I'll say it again Nolan: stick to smaller projects like Memento and The Prestige. Whenever you attempt something grand, you accomplish the exact opposite.