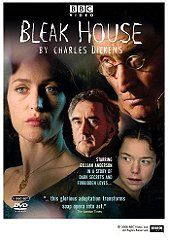 This mini-series has the twin advantages of being one of Dickens’s best novels and being an extremely well made piece of drama. As proof of this it won 5 BAFTAs and received a further 7 nominations.

Anyone who likes a good period drama should watch this; similarly anyone who likes Dickens can't afford not to see it. The storyline follows the corruption of all those fighting to prove their right to the massive inheritance of deceased gentleman Mr Jarndyce.

I have seen my fair share of Dickens adaptations and this is definately one of, if not the best...and very close to the actual story as well.

Very few people will argue with the fact that Charles Dicken's is one of the greatest writers of all time, this adaptation of 'Bleak House' will give people the opportunity to experience the legendary yarn, even if they cannot be bothered to read the book.

Keep an eye out for a particularly good performance of Mrs Dedlock by Gillian Anderson.