Fear and pain are only wind 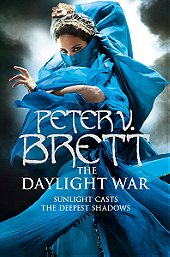 After the sensational, or at least very good previous parts, here I’m totally disappointed, because it was simply boring.

At the beginning we know mainly the story of Inevera, her youth and the events that we already know, but from her perspective. It’s also about Arlen and Renna and their return home, and return Leesha and Rojer, also we get to know a little more of Jardir’s intentions regarding the conquest of the North. Everything was very dragged, sometimes I had the feeling that everything just standing in place and is being expanded by less important details, which would only prolong the action. I like this world, but I was bored to death.

The second half of the book was much better. Finally it began, as I waited. Arlen’s powers are becoming bigger, unimaginable and inhuman, he makes important decisions about their personal life (emotional), to the North back Leesha and comes to a confrontation between her, Arlen and Renna. Here it was quite interesting, because I wasn’t quite sure, which of these women Arlen really loves. Finally, also comes the new moon, and finally something happens, Demons led by intelligent princes are not so helpless.

And most importantly, the title war in daylight, I was waiting for this confrontation from the outset. This wasn’t war, which I expected, and it was definitely too short and too fast, but the ending left a big 'wow' and I think that's really not the end, and just the beginning and I look forward to what will be in future books.